If you’re the sort of person who will use the arrow keys to finely nudge elements around a slide, then Deckset is probably not for you.

I do a lot of my writing in Markdown format, including structuring presentation outlines that way before I start building my slides. As such, the concept of a presentation tool that builds a deck based directly on a Markdown file always sounded appealing to me. How much time could be saved laboriously producing slides if they could be automatically generated from my outline?

The are already a number of good tools that will create a presentation from Markdown content, but these are predominantly web-based, requiring the presenter to use a web browser in full-screen mode to deliver their presentations. This is an arrangement that can certainly work, but one that brings a number of compromises for those used to presenting using familiar desktop tools such as Powerpoint and Keynote.

The original Deckset offered something new to the space - a Mac desktop app that offered a blend between the convenience of building slides based on Markdown and the reliability of presented directly from a desktop application. 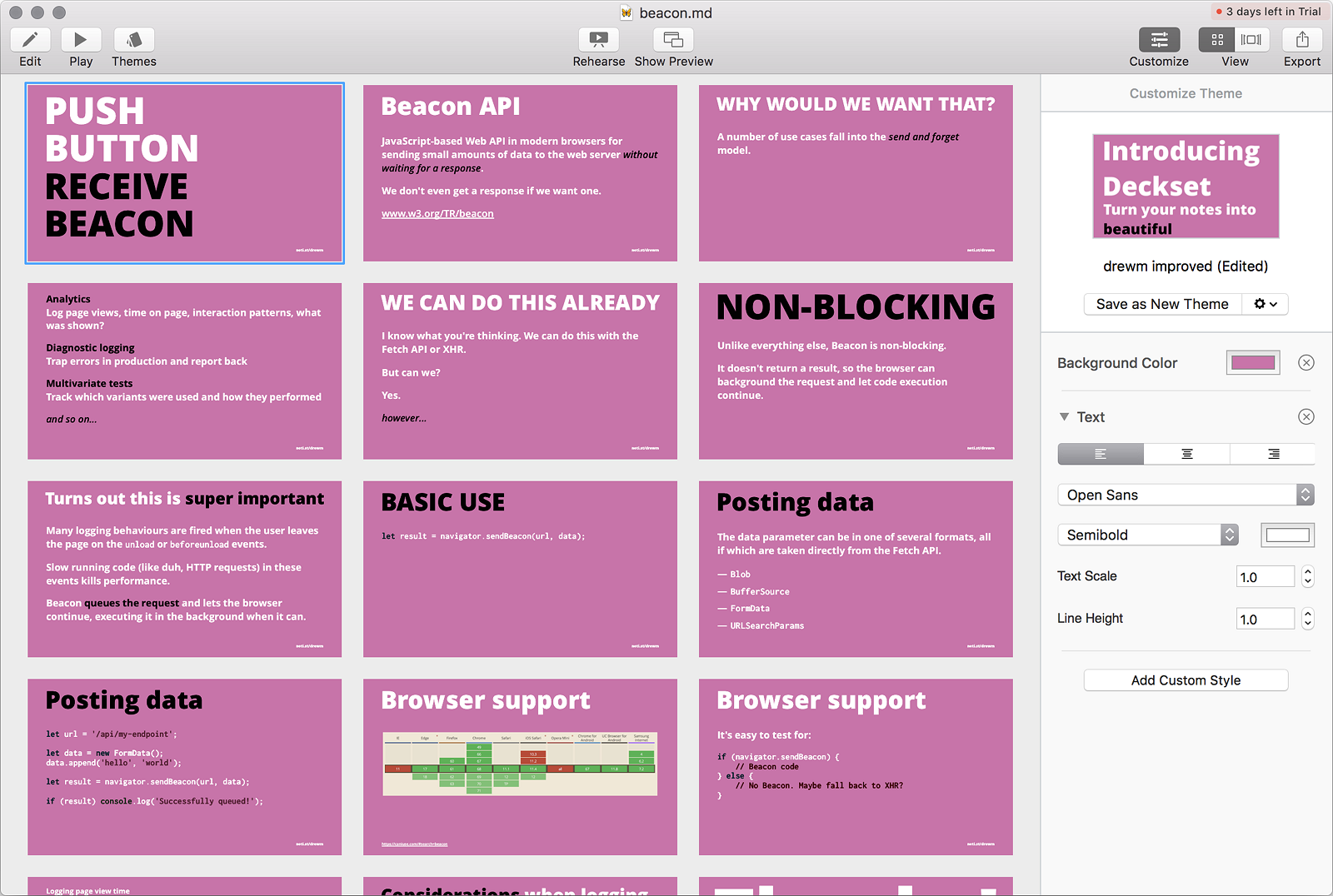 This initial version showed lots of promise, and certainly delivered on its promise to easily build slides from Markdown. It offered some configuration options for each slide, enabling the positioning of images and rough sizing of headings, but fell short of any further customisation.

The app came with a limited number of set themes - much like the default templates in Powerpoint and Keynote. These could get you up and running with a reasonable looking presentation, and you could flip between preset colour schemes in a few themes, but the customisation ended there. If you wanted to pick your own fonts and colours, you were out of luck.

Deckset had bags of functionality, but all of it was aimed at producing something fast rather than polished. Its approach was, and still is, that of a productivity tool rather than a creative tool. It helps you create slides quickly, ideally giving you more time to focus on the content itself.

This is fine for an internal presentation to colleagues. Great for a lightning talk at a local tech meet-up. Not so great for a big conference stage.

Deckset 2 looks to try to tackle these shortcomings and introduces some key new features to help lift it out of the meeting room and into the keynote room.

The big headline feature is the ability to customise the theme of the slides. For the first time with Deckset, the user has control over fonts and colours. This is accomplished by duplicating one of the in-built themes and then adding Custom Styles to overwrite various aspects. Want a different heading font? Add a “Header” custom style and set the font, size and colours there. It’s quite an intuitive process.

Themes exist as a feature of the application, not of the presentation, so if you customise a theme you’d do well to export it and same the theme file alongside your Markdown file. That would then enable you to open the same presentation, in the same state, on another computer.

The only aspect to this approach that I didn’t get along with was the inability to change any sort of ‘global’ values for the theme. If you want to change all instances of the theme’s font, for example, it appears that you need to add a custom style for each different use of text and set the font. This is a slow process if you want to try out a few options. If this functionality does exist somewhere, that’s great, but the interface doesn’t readily offer it up.

To put Deckset 2 through its paces, I decided to use it to put together slides for a 10 minute lightning talk I was due to give at my local JavaScript meet-up. Low enough stakes that I could retreat to Keynote if it all went wrong, but a real enough example that I’d be forced to actually use it in anger.

In use, Deckset 2 is fast, clear, and very polished. The application interface feels very at home on macOS, and is clearly designed specifically for the platform. Those familiar with Keynote will find any features they’re looking for in the first place they look, which is pretty much the pinnacle of good interface design.

The app supports presenter notes, add again through your Markdown file, and will show those alongside the current and next slide in a dedicated second-screen presenter view. This mode also shows a clock, but not a timer. I had to manually set a timer on my phone when presenting, which was another thing to think about. 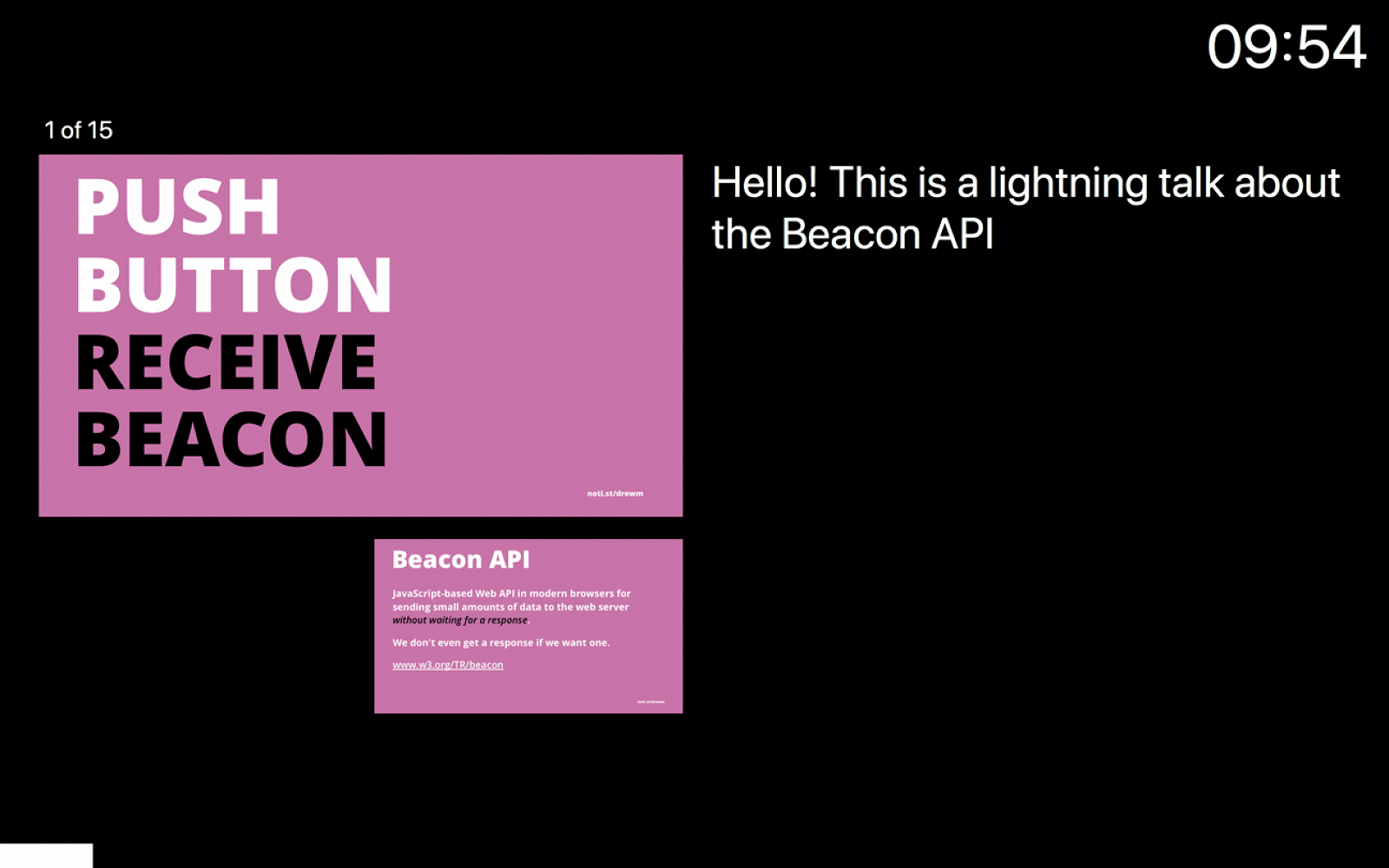 Other features that can be configured directly in your Markdown file are footers, basic slide build steps, and the ability to hide slides by commenting them out. If your slides involve using code at any point, Deckset has built in syntax highlighting for common languages, and does a pretty reasonable job in that regard.  Exporting a PDF to upload to Notist (of course!) was simple and worked well, with and without presenter notes.

Deckset basically touches a wide range of functionality but does so only lightly.

This light-touch on customisation and configuration is both Deckset’s great strength and its weakness. As a productivity tool, Deckset deliberately takes the choices away from you, forcing you to spend time on your content rather than slide design.

As a result of this, Deckset is perfect if you want to be able to very rapidly build a smart-looking slide deck where you do not want or need to worry about the finer details of any individual slides. It’s very capable, easy to use and appears to be very solid.

If your temperament leads you to want to make fine tweaks to a design, if you’re the sort of person who will use the arrow keys on your keyboard to finely nudge elements around a slide, then Deckset is probably not for you. For all of its capabilities, it will frustrate you.

On the whole I would recommend Deckset 2… but not to everyone.

Notist gives you a single page for your presentation, where your audience can find your slides, linked resources, video and social media feedback. There’s no need to fish around, bring everything together in a single place.

This is the blog post from Notist, a site for public speakers to share slides and build their speaking portfolio. Try it for free today.